Flight with a toddler (20 month old)

If my parents didn't ask us to come to Japan, we didn't really want to go this year. It's not that we don't like going to Japan, actually we really want to go there as much as possible, but if you know our son Nico in person, you'll know why. He's a lovely and happy child, but too wiggly! He can't stay still in one spot for more than 30 seconds.

Last time when we went to Japan, he was only 8 months old and wasn't walking yet. We knew this time would be harder... So we tried to make it as easy as possible. We decided NOT to use direct flight - Jetstar.

Direct flights sound easier, but not with Jetstar. We had a terrible experience last time with them. We booked a night flight, but they changed it to a 10am flight the next morning, and then that was delayed even more to 1pm, so we arrived in Tokyo nearly 12am. We were really exhausted. To make sure our night flight was really a night flight, we booked Qantas this time. Qantas doesn't have direct flight from Melbourne to Tokyo, so we had a transit at Sydney.

We left Melbourne around 9.30am and arrived in Sydney at 11am. This short flight was actually the hardest part of our trip. Nico slept in our car on the way to the airport, so he was wide awake on this flight. He kept moving around non-stop between Paul and me and the empty seat. We were prepared for this though. I read some tips for flights with toddlers and bought new small toys for him. I also wrapped them up to make it exciting to open. We gave Nico one of them during this first flight. He really loved it! Also we saved Nico's favourite Gibli animation (Kiki, Totoro, Spirited Away and Howel's moving castle) to our iPad and it worked well too. He sat down and watched it for at least ten mins.

In Sydney, we caught up with our friends and had lunch together. Then we went to my sister's home to have a nap before our long night flight (9 hours). Actually Nico fell asleep after lunch so by the time we got my sister's place, he didn't really want to go to sleep, but at least we Paul and I could have a little lie down while my sister was looking after Nico.

We left my sister's place around 5pm and had dinner at the airport. We knew that dinner would be served on the flight but the flight was 8.30pm and we knew that by the time the dinner was served, it would be nearly 10pm. We didn't want to interrupt Nico's sleep.

When we got on this flight, Nico was pretty tired and was ready to sleep. We got 1 extra seat so he put his legs on my lap and head on a cushion (it was actually my feeding pillow) in the extra seat and went to sleep after a feed (I still breast feed). He woke up a couple times for a feed, but slept nearly whole time! It was a good surprise for us how easy it was.

The flight back was easy too! We could get two extra seats this time, so Nico could sleep pretty well and I could sleep well too. We didn't need to give him a toy nor iPad. The arrival time was around 6.30am so the flight attendants started to wake passengers up for brekky around 5am (4am Japan time). Nico always wakes up quite early so it worked well too.

Our transit this time was at Brisbane and waiting at the airport was the second hardest time for us. We wanted to sit down and have a rest after long flight, but Nico wanted to move around. Well at least at the airport, we had space for him to run around. Also we could borrow a stroller there (our stroller was in checked luggage so we had no access during transit) so it was good. Our boy wants to be carried all the time so having no stroller can be just torture. We gave him another new toy there too.


Because we had to wake up early for brekky,  Nico was pretty tired by the time we got on the next flight at 10.30am. Nico slept for two hours from Brisbane to Melbourne. What an easy flight!
From Melbourne to Tokyo, it takes about 10 hours by direct flight. Like I said before, direct flights sound easier, but actually breaking up that 10 hours was much easier for us. If you're on the same flight for more than 10 hours, that means your kid will just be awake for longer hours. Just playing with kids in a small space for an extra 1hour will make you really exhausted.

If we can give someone tips for flight with toddlers, we'd say..
1. Choose a night flight as much as possible. If you have to fly during the day time, choose a flight around your kid's nap time.
2. If the flight is longer than 10 hours, break it up by using transits
3. Prepare some new toys 4. Ask check in staff to give you a whole row ( two extra seats) - it's sometimes difficult but you can still ask!
5. Get your kids ready for bed before the long flight - give them dinner, brush their teeth etc. If you try to have dinner with the other passengers, you and your kids won't be able to sleep until all the trays are cleared..

Personally breast feeding helped us with this trip (and the last trip) quite a lot. I was going to wean Nico before this trip but I'm glad I didn't. Whenever he was unsettled, I just fed him and he was happy. Feeding while taking off and landing helped Nico with ear troubles too.

We think Japan is one of the easiest flight destination with toddlers because you can choose a night flight. If we go somewhere domestic and it's 3 hour day flight, it would be harder than this 9 hour night flight.

Through this experience we got a little confidence in flying with a toddler. But we've seen mums with two kids or parents with a baby and a toddler on a flight too. Probably we haven't experienced enough to talk about this topic yet!

Posted by Allie @nuno and stitch at 12:22 No comments:

If you're visiting just Tokyo and still want to enjoy beautiful Japanese nature, Mt Takao is where you should visit. It's only about 40mins by train from central Tokyo. You don't need any hiking gear, you can even go there with a toddler in a stroller (if you wish, with baby in a pram too!)

This is where I used to go with my kinder and school for excursions. A cable car will take you to the halfway point of the mountain, where you can enjoy some attractions, a monkey park, a botanical garden, lookout and Yakuoin Temple. From there, you can walk up to the summit, but you can also stop there and go back. Of course you can climb the mountain from the bottom too-you'd better prepare proper clothes and shoes for this though. There are many routes to go up to the summit and you can choose which one depending on your hiking experience. It's a mountain that even school kids can climb so I'd say it's a"kids-friendly" place. 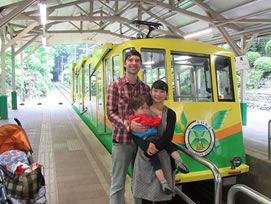 Since it got three stars in the Michelin guide book, it became really popular for international tourists. My mum told us that we would have to wait for a cable car for long time especially in autum leaves season.. 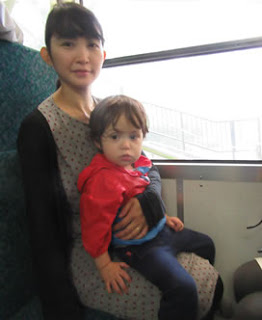 But the day we went was quite foggy and had light showers, (well the forecast was fine!) so there were not many tourists and no long queues for the cable car. The only thing we got disappointed was that we couldn't see the view from the mountain (you can usually see the city) but we really enjoyed the fresh air in the rain. 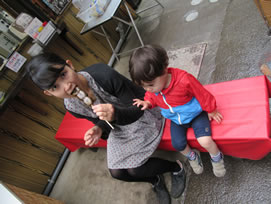 We had rice cakes near the monkey park and it was really yummy! 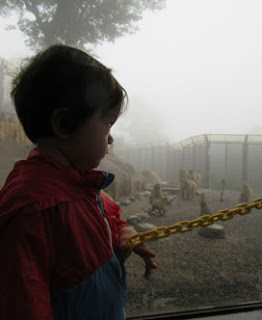 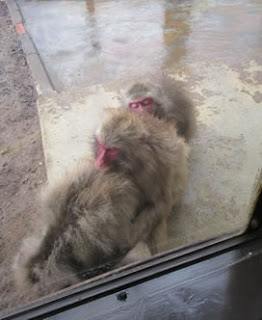 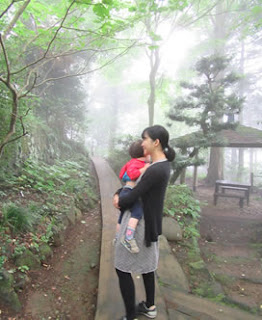 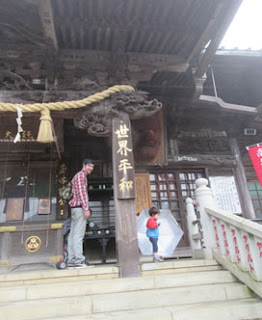 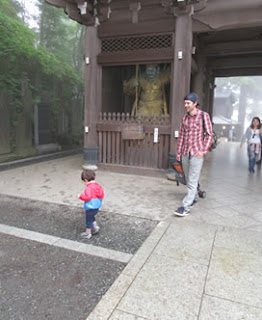 We didn't go to the summit so it took us only about two hours to go up and come back. We had Italian lunch near the train station. 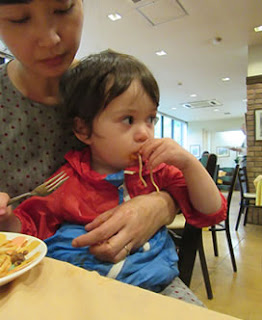 Hopefully we can go there again when the weather is better next time. We're looking forward to climbing the mountain with Nico too when he gets 5 or 6:-)