Isamu Noguchi is my all-time favourite artist and I just adore his talent! He’s got a Japanese name but he was actually American. (His dad was Japanese.) If you love mid-century furniture, you might know some of his mass production items like the Noguchi Table or Akari, but in fact he was more of a sculptor.

I got to know about this artist when I was working in Tokyo. I used to catch trains to go to work and one day, I saw a poster for his exhibition in the train. I always felt exhausted from my work in those days and usually didn’t feel like doing anything on the weekend, but when I saw the image of his “Energy Void” and himself , I felt a strong power and had to go to the exhibition.

The exhibition was really wonderful and I just fell in love with all his work. I always adore something Japanese that's mixed with Western things, but when western artists try to do something like that, sometimes their Japanese images are biased – for me, like the movie “Kill Bill”. But Noguchi did it very well.

His life was quite interesting too. He had a hard time as Japanese American around World War 2. He once had an affair with the famous artist, Frida Kahlo. But I like this episode about him and designer George Nelson’s famous iconic ball clock. 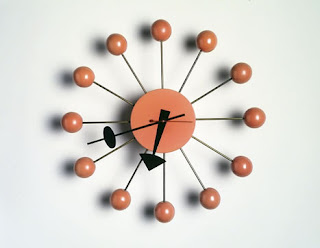 And there was one night when the ball clock got developed, which was one of the really funny evenings. Noguchi came by, and Bucky Fuller came by. I’d been seeing a lot of Bucky those days, and here was Irving and here was I, and Noguchi, who can’t keep his hands off anything, you know- it is a marvelous, itchy thing he’s got- he saw we were working on clocks and he started making doodles. Then Bucky sort of brushed Isamu aside. He said, this is a good way to do a clock, and he made some utterly absurd thing. Everybody was taking a crack at this, pushing each other aside and making scribbles.

At some point we left- we were suddenly all tired, and we had a little bit too much to drink- and the next morning I came back, and here was this roll (of drafting paper), and Irving and I looked at it, and somewhere in this roll there was a ball clock. I don’t know to this day who cooked it up. I know it wasn’t me. It might have been Irving, but he did’t think so-(we) both guessed that Isamu had probably done it because (he) has a genius for doing two stupid things and making something extraordinary.
George Nelson: The Design of Modern Design; p.111

Noguchi is just like this episode. His work is just beyond the ordinary people’s imagination, his talent is a real “gift” from God. He was often told that he was too advanced for the times to catch up, but I think the time still hasn’t caught up with the work he did almost 50 years ago.

There are so many places all over the world on my wish list to visit his work, but the top 2 are the Isamu Noguchi Garden Museum in Takamatsu and Moerenuma Park in Sapporo, which Noguchi designed just before he died.

My good friend Riki, who is a tour guide of Riki’s Tours Japan, took his Aussie group to the Noguchi Garden Museum just recently and I saw it on Facebook. I was soooooooo jealous! After reading this, you might visit there (with Riki’s Tour?) before I make it and if you do, I’d still be jealous, but also so happy if you become interested in this wonderful artist from this blog entry.

Email ThisBlogThis!Share to TwitterShare to FacebookShare to Pinterest
Labels: my favourite things