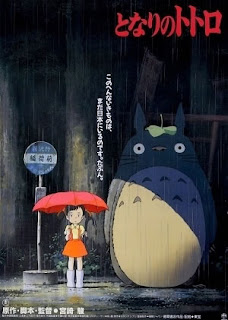 Have you ever watched studio Ghibli’s animations? If you haven’t you’re missing something! "Animations" sounds like they might only be for kids, but they're really great for adults too.


I grew up with Ghibli and don’t remember how many times I watched "Totoro". I love the Japanese countryside scenery in Totoro. I never lived there, but it made me feel nostalgic somehow. In Totoro, Miyazaki (Director) probably describes the times my parents grew up. Satsuki and Mei (two of the characters) pick cucumbers and tomatoes from a farm and cool them in a cold stream to eat as a snack. No fridge, no lollies. Kids these days might find it funny, but I think it’s so nice. (You can also see they're using TENUGUI in many different ways in Totoro!) This story about two sisters also always reminds me of my childhood with my big sister. My big sister was a bit bossy, but caring like Satsuki and I was just a carefree little kid like Mei. We sometimes had fights a lot but also lots of fun together.

Miyazaki doesn’t say much about the inspiration of some of the places in his films but many Ghibli fans think some of them slightly based on places in Australia because Australia is Miyazaki’s favourite country.

It’s very difficult to choose one favourite from Ghibli but “Whisper of the heart” is definitely one of my special movies, because the town it depicts is my hometown ‘Tama’.

I also found a very nice blog showing all the different places. This person actually visited my hometown: http://japan08.blogspot.com.au/2011/03/day-12-part-8-seiseki-sakuragaoka.html

In “Whisper of the heart”, there are also two sisters (again just like my sister and me.) Their father works at a library and their little apartment is  filled with books. My otousan (dad) is not a librarian – he was an university professor - but our home was (and still is) full of books just like their home. I used to like writing stories just like the main character Shizuku. All the small conversations reminds me of my childhood. The only difference is that I didn’t have a boyfriend making violins!


The newer Ghibli movies are nice too, but Nausicca, Laputa, Totoro and KIki are four classics. If you’re wondering where to start, I recommend Laputa, because it’s full of adventure, a bit like Indiana Jones.


My auntie bought a super cute Totoro backpack for Nico when we went to Japan in June. At that time, Nico was too young for a backpack so we kept it and we’re planning to give it to him for Christmas. Just to make sure he knew Totoro before he received it, we started showing him Totoro about a month ago, and now he loves watching Totoro!! I guess he likes the music too because that was his lullaby when he was a tiny little baby. Paul and I sang it again and again until he went to sleep. 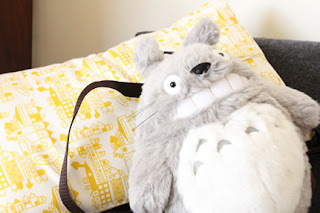 What is your favourite Ghibli movie? Why do you like it? It’ll be interesting to know what other people like!

Email ThisBlogThis!Share to TwitterShare to FacebookShare to Pinterest
Labels: Japan, my favourite things