Sweet home project 6 - how we got our home

So we bought our home in May in 2015. Not in Ringwood or Heathmont, but in Burwood. Yes, Burwood! Much closer to the city as well as Paul's parents place in Mt Waverley. But how did we manage this? I'm going to write about it in this entry. 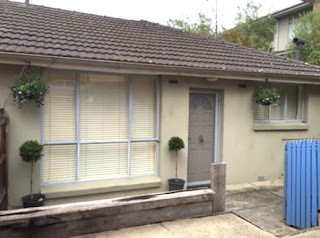 I didn't mention it so far, but we had a great helper throughout this tough house hunting time. That was Paul's sister, Maria. She has studied architecture at uni and she has her own furniture business. She loves looking at houses, so she couldn't help checking realestate.com.au for us when we started looking for a house. She sent us the links to properties almost everyday! She sometimes came to the inspections with us and even made bids for us at the auctions (we were pretty nervous).

Sometimes she sent us links to 2br units with a new floor plan she designed for 3br. She's very good at this. Then when we found it's almost impossible for us to buy a 3BR house in the Ringwood area, so we started seriously looking at 2BR units, because thanks to Maria we realised that some of them were changeable to 3BR.

We never thought we could afford a property in Burwood, but some of the 2BR units were within our range - unfortunately, they were usually pretty small and almost impossible to change to 3BR.

One day Maria sent us a link to another 2BR unit in Burwood, which seemed to be a pretty decent size, but their asking price was pretty much at our limit (even without the extra percentage added on), so I didn't even look closely.  It was an auction property, so I could just guess it would become more than we could afford.

But a couple of weeks later, I noticed the same property was still on market and it had become a private sale. They didn't sell at the auction. So I thought it might be a good chance. We wanted to see it as soon as possible, but the agent told us it was difficult because of the tenant. So we waited until the next inspection on Saturday....but oh no...we went shopping before the inspection and run out of time. We arrived there 5 mins after the end of the inspection time.

Fortunately, Maria was there too and asked the agent to wait for us, so we could manage to see the inside. We quickly looked around and agreed that we both really liked it. There was the possibility that they might sell it before the next inspection, so we had to make a quick decision. We decided to put in an offer after only a three minute inspection! By that time, we learned a little bit about private sales, so we weren't trying to bargain or anything, we just decided the price that we were happy to pay, but we thought the vendor might ask for a bit more, so we left some room for negotiation.

After putting in an offer, we nervously waited, but pretended like nothing happened. We experienced so many disappointments after being excited, so we didn’t want that feeling again and tried for keep our expectations low. But in the end, the vendor just accepted our first offer and we didn't even have to negotiate or pay extra. Actually, we were told she wanted a bit more, but the agent suggested that she accept it. We never thought the agent would work for us buyers, so we were very surprised but at the same time, very happy. Probably after the auction, the agent wanted to sell it quickly rather than waiting a long time to sell at a higher price.

Three days after we saw the unit, it felt like ours already (although not officially until the settlement). It’s small but really decent, there’s no back yard but we've got some front yard and a sideway. The building itself is very solid. The best thing about the unit is the location. Within a 30 second walk, there's a school, play ground and a cafe. It's not far from public transport and shops too!

Although we haven't moved into that place yet, we're loving the unit more and more since we bought it. Why could we get our perfect place at a good price? Well, we can think of at least a couple of reasons. Firstly, the property had a tenant renting and the contract finishes in late January in 2016, so maybe people who wanted to move in quickly avoided that place. Secondly, our unit is a part of a group of flats so although our place is single story and has its own street frontage, the price was similar to an apartment.

Anyway, we got our home finally. Although we had to wait to move in, this have us time to think about how we want to change the 2BR into 3 BR. We pinned so many images of kitchen, garden, bathroom on our Pinterest board! 7 months of waiting to move in so far has felt very long, but at the same time, quite enjoyable. In a couple of weeks, the renovation at our new place will start. We’re so excited!

This is how we got our home, but I will write about how we're making our dream home in this series too. Stay tuned!