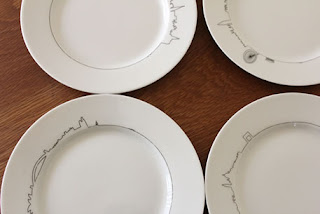 I've always liked ‘city skyline’ designs. Maybe that’s why I like this ‘city’ TENUGUI in my shop. My sister bought me these plates for my birthday present when she was visiting me in Melbourne.

It was after I moved from Sydney to Melbourne in 2008. They are a set of 4 - London, New York, Paris and Sydney. If I saw these at a shop now, I might get upset that Melbourne isn't included, but at that time, I really missed Sydney. 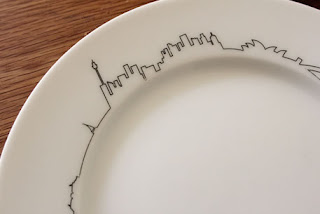 When I moved from Sydney to Melbourne in 2002, I wasn’t that confident in my choice. I just got a job here after I had been studying in Sydney for 1 year and had never been to Melbourne, so I didn’t know what it was like.

For the first 5 months, I missed Sydney terribly. I missed its blue sky, blue harbour, and lovely beaches. I felt like Melbourne was somehow a colourless place. But after 6 months, I started to feel more comfortable. I began to love all the laneways, lovely cafes and the vibrant European-style markets. 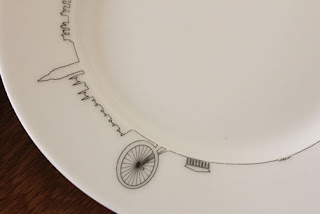 In 2003, I went back to Tokyo and then in 2006, I decided to come back to Australia again...but to which city? I wanted to choose Melbourne, but I knew it would be hard for me to find a job here, so I picked Sydney – well, a little bit later on my boss in Tokyo gave me a job which I could do from home, so maybe I could have chosen Melbourne at that time!

Anyway I had a lovely time in Sydney. When I was a student there, I couldn’t do much (with little money) but I enjoyed walking around the city every weekend and came to love Sydney even more. I was very happy and felt like I was living in heaven. Whenever I crossed the Harbour Bridge by bus and saw the Opera House and the lovely harbour, I thought I was the luckiest person in the world.

But somehow I always had a strange feeling like I was having a dream. I felt like floating and my feet were not touching ground. If you are in heaven too long, you might feel like this. I wanted to start putting down some roots. That was the time I decided to move from Sydney to Melbourne again. 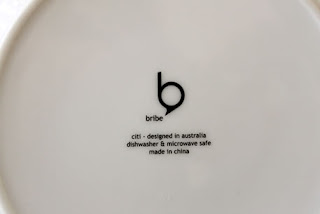 Although I then felt very confident about my choice, I still missed Sydney again after I moved. Sydney is such a lovely city. Whenever I met someone in Melbourne who thought Sydney was not that good (because there is a bit of Sydney-Melbourne rivalry), I made it my mission to make the person like Sydney! This plate represented my love for Sydney and when I had guests at home, I always used the Sydney one myself. 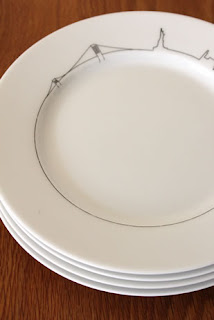 It’s been almost 7 years since I moved to Melbourne. Now I have family here, so Melbourne really is my dearest city. I still love Sydney, but I like to use any of these plates now. They are all equally lovely ;-)

Which one is your favourte?

Email ThisBlogThis!Share to TwitterShare to FacebookShare to Pinterest
Labels: about me, my favourite things