Last week, I shared my favourite dinosaur designs cup, which was cracked by my little son Nico (but I know it wasn't his fault). I wrote that I almost felt like crying when I saw it was cracked...but I didn’t say I cried. Well, if these Tintin mugs are broken, I will definitely cry and will not be able to get over it for a few days :P 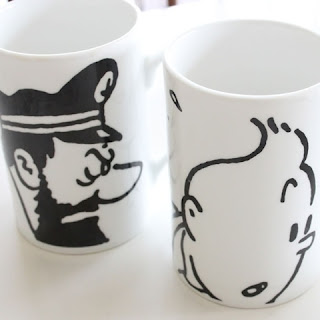 Unlike many Japanese people, I don’t usually like to have "character" goods at home. I like some characters like Moomin or Miffy, but to me too many character goods can make a home seem a bit childish. But somehow, Tintin is not childish for me. I’d be happy to decorate my wall with a Tintin picture book or a poster. As for our mugs, I think that they look pretty cool, especially with these black and white designs.

Paul and I got these mugs in France when we went on our honeymoon. Some of you might already know, but we didn’t actually intend to go to France for our honeymoon, we just accidentally appeared there. Our flight to Zurich from Florence was cancelled after a little bit of a drama at Florence airport. We had a connection flight to Tokyo from Zurich, so they transferred us to Bologna airport to go to Paris, then to Tokyo by Air France. We saw some Japanese people at Florence airport for the same canceled flight and they got Lufthansa tickets, so it was pretty random that we got a ticket to France.
On transit, we had four hours in Paris. I had been to Paris before, but Paul hadn’t. We wanted to see something there together. We went to Information and asked where the closest thing to see was and they suggested Sacré-Cœur. Our plan was to go there by taxi (takes about 30 mins), stay there for 1 hour and come back two hours before our next flight.
Howevere, the taxi we took got stuck in a traffic jam! We were so nervous about whether we'd make it back in time, since it actually took us about 1 hour to get Sacré-Cœur. We quickly looked around Sacré-Cœur, took some photos and went back to the airport. 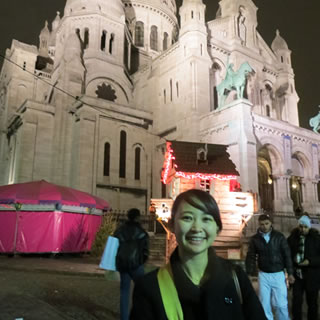 When we got on a taxi to the airport, the driver could only speak French. I studied a bit of French at uni many years ago (Paul studied it too, but could only remember "Parlez vous Anglais?") and tried to tell him we wanted to go to the airport, but he still asked us some questions and we got a bit confused. Then we realised that he just wanted to know which airport and terminal we wanted to go to - there are so many terminals for Charles de Gaulle airport!
Luckily we arrived at the right terminal of the right airport and had a little bit of time before our next flight to Tokyo. There was Laduree (a famous macaron shop) just in front of the gate, so we got some lovely macarons and saw a couple of souvenir shops. At one of the shops, Paul found this Tintin mug and he wanted to get it, so I said I’d buy it for him. While I was in the long queue to pay, I thought about buying another one for myself, but it was 18 euro and I didn't want to go back to the end of the queue again, so I just gave up. 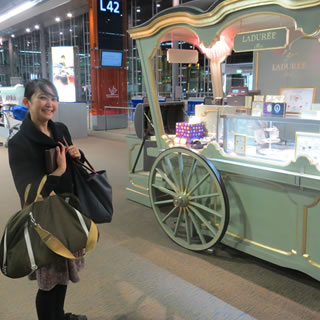 When we got back from our honeymoon, we unpacked everything and found these two Tintin mugs in the box.  We were in such a hurry, we didn’t realize it was a set of two mugs! Whenever we see these mugs, we think about our funny, shortest trip to Paris and that bring back happy memories. We will definitely go back to Paris again...but hopefully we'll have more than 4 hours next time!

Email ThisBlogThis!Share to TwitterShare to FacebookShare to Pinterest
Labels: my favourite things