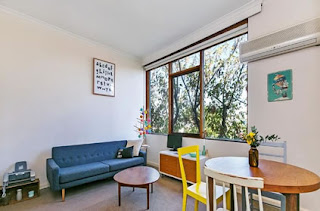 In the story of Sweet home project 2, I wrote about how we chose the agent to sell our St Kilda East apartment.
Sweet home project 1
Sweet home project 2
So now we got an agent…what’s next?
The agent told us that the photographer would come and take photos of our apartment, but we still had some time. We had large, lovely wooden frame windows in the lounge and bedroom and that was the great feature, so we decided to sand and oil them to make them look nicer. They had started to get a little bit old and stained over the years.
Paul’s parents came to help us. They also helped with a couple of other parts, like fixing up a rotten kitchen window frame and painting the communal corridor wall and our front door, of which some parts were peeled off. They even cleaned the windows from outside (our apartment was 2ndfloor, so it wasn’t easy!!!)
Also Paul’s sister Maria came to the apartment and gave us some good advice about the interior (she does this for her work.. SEE here! ). We moved our furniture so that the room would look bigger. We even took out some of our stuff to Paul’s parents’ place temporarily. Living in a showroom-like home was sometimes inconvenient, but it was only for a couple of months, so we decided to do that.
We had inspections on both Saturday and Sunday, because St Kilda East has a large number of Jewish people, who may prefer Sunday inspections. The first Saturday inspection was a bit of fun for us - we were a bit excited to leave home and have a cup of coffee at neighbourhood café. But soon it became a bit annoying. We had to wake up early every weekend and keep our home tidy. Besides this, not many people were coming through. On the first weekend we had 5 groups and on the second weekend, 3 groups came. And the condition of our apartment was really good! A sparkling kitchen with marble benchtop, light-filled lounge, beautiful carpets (we didn’t wear shoes at home), close to station and shops, secure small block apartment, top floor...you name it, we had everything! Haha, maybe I sounds like I'm still trying to "sell" it, but we just didn’t understand why people weren’t coming.  Maybe the timing wasn’t that good, but we couldn’t wait until spring because we wouldn’t be able to move out just before my due date.

When we started worry that we might not sell at the auction, the agent told us that there was one person who was pretty keen to buy our apartment. She was a young girl who had some financial support from her parents and she really liked how we lived in the apartment. She even liked all our furniture!  The agent said she wanted to put in an offer before the auction, but if we didn't make a decision quickly she’d go to the other auction next weekend. Is that a tactic for buyers that make vendor feel nervous about that they’d not come back to buy at the auction? We weren't not sure, but the agent said this was a pretty good opportunity, especially since we weren't getting many people interested.
We were ready to accept an offer, but hers was a bit low. We were trying not to be greedy, but at least we wanted to get a similar price to what I paid 4 years ago. The agent understood our situation and tried his best - in the end, he got the price which was a bit better than we expected (it wasn’t as good as we first planned though!). The price was actually a couple of thousand dollars lower than the price I bought it for, but over those 4 years I also didn’t have to pay rent to someone else, so in the end we thought it was alright.
So we sold our little 1BR apartment in May in 2014 and moved out in July, which was 3 months before my due date. We were very emotional about moving out of our favourite place, but we got a lovely 3 BR and study house to rent from Paul’s parents and were excited about getting a room ready for little Nico, so it wasn’t too bad.
We really loved living in St Kilda East. Whenever Paul explained to someone we lived in St Kilda, I was a little upset because St Kilda East is completely different from what you imagine from just “St Kilda”. We really loved the little shops on Carlisle Street, including a great Jewish Bagel shop and a funny, old fashioned video shop with a huge selection. We also really loved the old beautiful building of St Mary’s church and hearing the bell from our apartment. When we get old and if we want to downsize our home, we might go back to this our favourite area again ;-)
Next time, I will write about how we got our new place!
With love,